Antonis is the co-creator of Genius Jamtracks. He is also the co-creator of PitchBop.
A multi-instrumentalist, he performs with the free jazz trio Outward Bound, as well as with the FreeTheSopranoPlayer artist collective.
After a few years of being involved in music software development, he discovered that good code feels like beautiful music to him.

Emma Collier is the PR strategist & brand storyteller for Genius Jamtracks and PitchBop. A versatile writer with a lifelong love of improvisation, she enjoys helping artists shape their stories into material they can use to create the opportunities they seek. When she’s not swimming in language, she can be found hosting collaborative, multi-medium art salons with her quartet, Artemis in Harlem, falling in love with the piano, or somewhere on the mountain.

Dimitris is one of the creators of Genius Jamtracks. He is also one of the guys that created PitchBop.
Primarily a guitar player, he has taken part in various live and recording projects, both as a sideman and as a leader. When he is not playing with other people he spends his time playing along to the beautiful apps he helped create.

Yiannis is a painter and a drummer. Ηis endless creativity pushes his art to the limits. He is one of the most active free improvisers in the greek music scene and has released three solo albums and many others with the bands he is part of.
Genius Jamtracks free improvisation drumming is based on his ideas!

The inspiration behind
Genius Jamtracks

For Antonis and Dimitris, the creators of Genius Jamtracks, one of theirs is Zacharis; anyone fortunate enough to have heard him play finds themselves humbled. To call Zacharis a drummer would be an understatement: to them, he’s the grandmaster of polyrhythms and the inspiration behind the creation of Genius Jamtracks. The app’s algorithm is designed as a way to give formal coherence to practicing polyrhythms so musicians finally have a tool to practice within the pursuit of becoming improvisers.
Genius Jamtracks is a tribute to Zacharis, a way of sharing with all the musicians around the world who won’t have the chance to meet him, what his genius inspired them to learn.

Zacharis, thank you for being a friend,
a mentor and an endless source of inspiration.

Raised in a musically esoteric family on the outskirts of NYC, Ruby’s first instrument was a 1930’s banjolele and her first gig alongside her grandparents at a local festival at the age of ten. Her father, a prominent jazz bassist, encouraged her pursuit of the bass as a way, as he put it, of “managing unmanageable weight, learning how to carry it great distances, and make it sound marvelous nonetheless”.  When she’s not laying down lovely lines with the trio, you can find her working on one of her giant finger painting murals, improvising sketch comedy in unassuming locations like the bank, and generally putting a little bit of magic into everything she does. 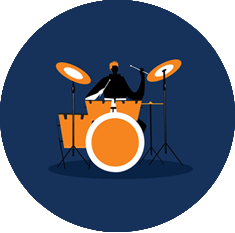 Percussion has been a lifelong passion for Earl. From the time he was a child, sounds and rhythm were his primary fascination: how they exuded from every object and how that changed depending upon the impact, how they could be created and developed on a whim with literally anything you could put your hands on. The world has always felt like one giant drum set to him and in his free time he can often be found seeking out and recording the unintentional percussion that occurs from both man and machine in the world around him to incorporate into his own music later. 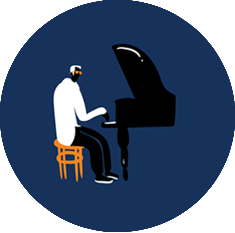 Jarrett’s first piano was drawn on piece of poster board at the age of six and kept hidden under his bed to practice on the sly after his parents refused to let him play the piano in their house. Entirely self-taught, one of his greatest joys is helping other people learn how to speak through the instrument, no matter how they find their way to it. In addition to creating beautiful melodies with the trio, he loves shooting experimental films in ghost towns, arguing about black holes with misguided strangers on the metro, and being under water whenever possible.

Many thanks to Sami Amiris, Ronan Guilfoyle, Jean-Michel Pilc and Aimee Nolte for the inspiration and resources.